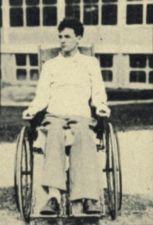 In the seventies and eighties, we demanded our rights. It did not happen by magic. It took lots of hard work by many thousands of disabled people. In the Seventies and the Eighties we organized, protested and petitioned. Our unity was power and we used this power to end the blatant discrimination against disabled people.

Back when I was young, we had to beg for access: now we demand it as our right. Now it is the law. The 1968 Act mandated equal access to public buildings. IDEA, the mainstreaming law, promised that disabled children would be educated side-by-side with their able-bodied playmates. In 1973, Sections 501 and 504 promised to end discrimination against disabled people in federal employment and contracting. And finally, passage in 1990 of the Americans with Disability Act --- the most sweeping civil rights law ever passed, anytime, anywhere --- granted us full and equal access to employment, public accommodations, transportation, the whole shebang.

Disability rights first became a national issue in 1977. Federal laws enacted in 1973 were not yet being enforced. Disability activists got tired of waiting and took action. They staged a sit-in at the Federal Building in San Francisco, effectively shutting down Federal activity in the region. The activists barricaded themselves on the fifth floor of the building and they stayed for more than three weeks. The sit-in became a nationwide media sensation.

The officials first tried to woo the sitters out with ice cream and cookies; then they tried to starve them out. The officials cut off the phones of the protesters to keep them from the press so the activists communicated their demands to the media by means of sign language and signs hung out the windows. The press attention was spectacular and supportive. Soon other groups joined the sit-in: Blacks, gays, priests. Congressmen, using their authority, passed police barricades to bring in food. Even the mayor brought air mattresses and garden hoses with shower heads. It was a public relations disaster for the federal government. After 26 days, the officials surrendered and agreed to all the disability demands. It was a stunning victory.

Here is another example of "Crip (cripple) Power." In the city of Denver, public transportation was not accessible to the disabled. To change this, disabled people staged an action. People in wheelchairs handcuffed themselves to busses, they pitched themselves out of their chairs and crawled under the busses. Waving posters, chanting slogans their supporters rallied round. Rush-hour traffic was brought to a halt, the police were called and the local media gave great coverage as the cops tried to drag paralyzed bodies out from under, and saw open the handcuffs. Cameras filmed as the offenders were lifted into the police wagons, booked at the police station and placed in inaccessible jail cells. The action was the lead story that day in every paper, on every TV station. After several such actions, the city agreed to make its transportation system accessible to people with disabilities.

Activists have learned that disability is good copy. They have learned that, through the media, they can force change. They have learned that civil protest works. They have become experts in creating events that evoke press interest, TV time, photo ops, and strong sound bites. Today's disability activists handle their media relations with sophistication. In training sessions, they have taught each other how to build a strong relationship with the media and the entertainment industry. It is their purpose to see that when the media covers our issues they do so in a way that shows disability as a normal part of the life experience and not something freakish or "a fate worse than death."

Looking at these achievements you might think that our battle is over, our war is won. You might think that in America people with disabilities no longer face obstacles or bigotry. This is wrong, very wrong. The law now is on our side but a law is just a piece of paper until it is enforced.

The eminent churchman, Rev. Howard Moody, once said, "No wars are won in social change when laws are passed, only an important battle is won. The hard and difficult struggle is in changing minds and reshaping institutions..." American minds and institutions still need reshaping. People with disabilities are still discriminated against in American society. Equal access is more an idea than a fact. Here are some examples:

In truth the old stigma remains --- disabled people are still shunned, abused and ridiculed. Thanks to the work of the disability rights movement, the situation has greatly improved over the last decades: nevertheless the stigma remains.

Where does it come from? Here is how Robert Murphy explains it. He was the Chairman of the Anthropology Department at Columbia University. He used a wheelchair as the result of a spinal tumor. Speaking as an ethnographer, he observed,

Disabled people contravene all the values of youth, virility, activity and physical beauty that Americans cherish. We are visible reminders to the able-bodied that the society they live in is a counterfeit paradise, that they too are vulnerable. We represent a fearsome possibility.

Rather than confront reality, too many dismiss us as Less Than Equal. We are supposed to be "mainstreamed" into American society. There are said to be more than forty million of us, yet you seldom see a disabled person in a key management job. Seldom do you see people with disabilities on TV or in the movies.

There are very, very few disabled people who are celebrities, elected officials or highly visible members of the community. Recent psychological studies have shown that while Americans now are more tolerant of seeing disabled people in schools, the workplace or on the street, there remains a resistance to accepting them as people. They doubt the ability of disabled people to hold positions of responsibility or leadership. Americans have strong doubts about their capability, their dependability. There remains the age-old belief that if a person is disabled in mobility or senses, then he most likely has impaired intelligence and emotional instability. And of course, there's the medieval belief that disability is God's punishment for some terrible sin --- this too lingers in the subconscious of many.

Perhaps the most revealing finding is that a majority of Americans are reluctant to have their son or daughter marry a disabled person. Too many Americans still feel they would rather be dead than disabled.

As African-Americans, women and gays have found, there is a big difference between talking social justice and actually getting it. As they say, If you talk the talk, you should walk the walk. And too many of our businesses and institutions and schools and hospitals and HMOS are not walking the walk.

Society has deep feelings about disability. These attitudes have not changed, deep down they have not changed. Like racial and gender bigotry, they are hard to own up to, harder still to root out. But this is not the end of the story.

We have learned in our generation that if we stand up for our rights, we will get them. We have learned that we have power if we join together and fight for justice. We must fight to end this discrimination and this stigma. Franklin Roosevelt would be proud of what Americans with disabilities have achieved. The president would be pleased that Russian and Americans with disabilities are working together to end discrimination and bigotry.

Roosevelt liked the poetry of Alfred Tennyson. There is a line from one of his poems that sticks in my head:

I am the master of my fate; I am the captain of my soul.

We disabled people will become masters of our fates and captains of our souls. Perhaps not in my lifetime, but I will continue to speak out and write on disability rights for as long as I am able.

Go back to Part I

Go to a letter about this article

Go to the most recent RALPH